A few years ago, I tried bbq at that famous place up in Syracuse. I found it — and the company I was with — to be overly salty and gross. I came to the same conclusion that many other folks have: don’t order barbecue north of the Mason-Dixon Line.

But today, I discovered a place worth breaking all the rules for: 3 Hogs BBQ. What other rules? Well, I really hate driving. I learned late in life and I only drove on a highway once — by accident. I don’t like people honking their horns, passing them, them passing me, any of that. It was recently my birthday and I always like to set a goal or project this time of year. For several months, I made up my mind to cross the state line . . . into Pennsylvania.

I had to make a lot of plans: massive car repairs, charging my phone charger, filling up on gas. Plus, I needed to find something appealing and fun to do once I got there. Also, I needed the place to be open on weekends. Most importantly, I needed to be able to access the place from quiet, country roads. I looked at maps for a long time, checking out back roads, service roads, cemetery paths and farm roads. I saw that I could probably get to 3 Hogs BBQ in Spring Grove, PA (they have 2 other locations).

I checked out their menu and salivated every time. I could tell that they do barbecue with a decadent touch. They make everything themselves, smoking the meat out back, offer just about every type of sauce you’ve heard of and some of their own, plus luxe additions like shrimp, crab and lobster.

So, I drove there! As it turns out, I live on a road that’s known as part of the Mason-Dixon Bypass up by the state line. You might think the roads were empty, but most of the time, someone was right on my ass, even with dangerous curves near the Allegheny Mountains: it’s a popular scenic route from Baltimore to Pennsylvania for motorcyclists and people avoiding highways.

The restaurant is on a side street in back of a paper mill — I’m glad for GPS! There’s ample parking and the smoker and chopped wood are good signs of things to come. 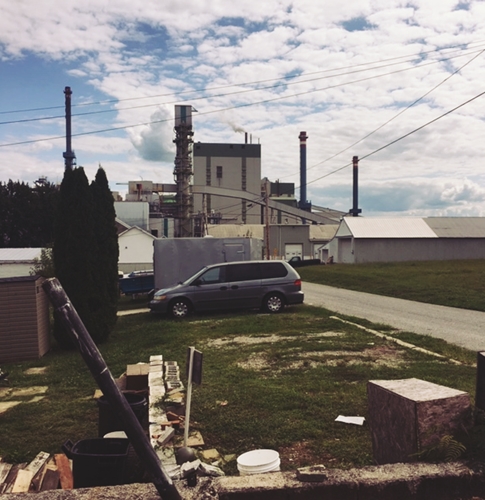 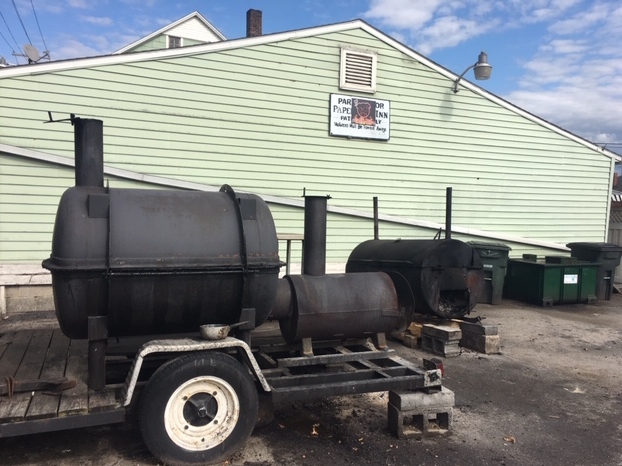 They have a revolving series of photos on the wall, what Jon Taffer of Bar Rescue would call a “call to action”. 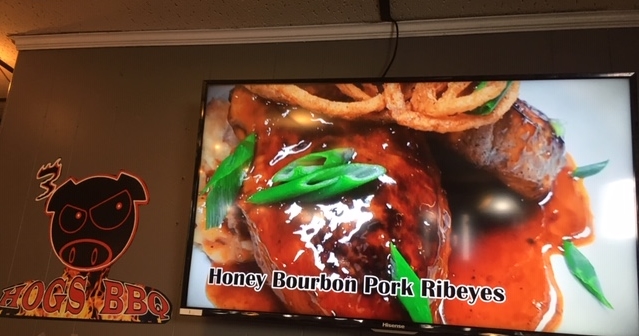 They make everything to order, so be prepared for a little wait. There are plenty of tables.

Along with their extensive menu, they have specials. The Chesapeake Chicken Cheesesteak is terrific value! For $12, there was a sub roll filled with smoked pulled chicken, fried sweet onion, crab dip, cheddar cheese, Old Bay BBQ sauce, along with a side of your choice. The sandwich is rich, but not goopy. The onions add subtle sweetness, along with the sauce. Old Bay BBQ is listed as not one of their spicy ones, but the seasonings are well balanced. The cheese takes on smoky flavors in this combo. There are big chunks of chicken breast.

As my accompanying side, I couldn’t resist the siren call of Mac and Cheese with burnt ends (they have a few kinds). This side would be a great meal on its own and very budget friendly. The meat is smoky with wood notes, but not salty — that’s because it’s the real deal and not loaded with fake hickory salts. It’s a rich elbow mac and cheese, the baked cheese style. I think it’s a combo of cheddar and Gouda.

Having traveled for quite a way, I wanted to try a couple of other sides. The Parmesan cauliflower was still nice and crisp. With the savory — but subtle — cheese flavor, you’ll love veggies again and they’re good for you.

I always try to eat a raw veggie each day, another healthy habit to get into. Raw veggies have enzymes that cooked ones don’t. Their cole slaw is mayo based, but also has tangy vinegar, with finely shredded green and red cabbage, as well as carrots. It has an appealing salt hit.

I tried three of their many sauces. Honey Bourbon is slightly sweet, but not ketchupy. It’s more like a glaze. I also tried a bit on some leftover steak and that was great. It’s not spicy. Carolina Red is a North Carolina red vinegar sauce that’s more like a thicker hot sauce. It’s got a hint of salt, heat and it’s tangy. Versatile! Carolina Gold is a complex vinegar-mustard sauce that they make with 18 ingredients. It’s smoky, tangy and a bit peppery. It’s not an acidy yellow hot dog mustard. It’s very well balanced and quite a bit thicker than most South Carolina sauces.

I saw a bunch of locally made pops at the counter and ordered the Old Gettysburg Southern Style Vanilla with the picture of Jesse James on the bottle. I’ve read and own the 500 page biography of him, so I’m quite familiar with his life story. Then, I realized that I was actually north of Gettysburg and would have quite the lengthy ride home! The vanilla pop is not overly sweet, with a toasted vanilla flavor that is fantastic with bbq.

They make all of their own desserts, including huge cookies, pies and cheesecakes. I resolved that I would try some next time!

One thought on “‘Que worth leaving Dixie for: Spring Grove, PA’s 3 Hogs BBQ”