With this oppressive sticky, hot weather we’ve seen on the East Coast, I was recently thinking about the citrusy splashes my mom kept while I was growing up. Her bathroom was all white porcelain tile, with a wildly crazy bright floral wallpaper. On a vintage European ice cream trolley that she had spray painted glossy white, there were always several different bottles of European light and cooling things to apply after a bath. I don’t know if I was allowed to use them, but I always did, ha ha! And so, I bemoaned the disappearance of that delicious summer tradition.

But now, we can bring that feeling back, better than ever! Famed French parfumeur Annick Goutal of Goutal Paris has created a new type of fragrance format: the alcohol-free water. I was happy to be hosted to experience it! 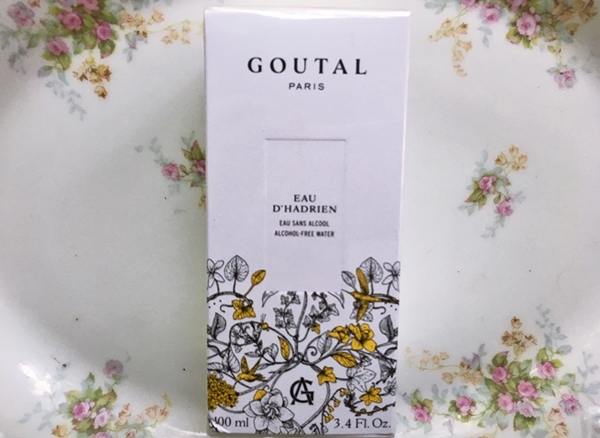 Eau d’Hadrian is one of several scents created in the alcohol-free water. Without the chemical and burn of alcohol, these are perfectly safe to use in the sun. You can spray them on clothing without fear, your hair and body. Eau d’Hadrian is considered the Goutal Paris “house fragrance”.  It is meant to evoke the lemons of Tuscany and named after the Emperor. I can let you know that Tuscans grow little lemon tree plants on their sun porches, in the way I have chives: they’re ubiquitous!

I notice fresh, tart lemon zest and a little bit of savory herbs, greenery. This absolutely can be worn by everyone, both day and night. It is packaged in a very elegant, heavy, white porcelain-like spray bottle. This would be one of those fabulous gifts when you really need to impress, whether it’s for a sophisticated loved one, celebrity or even aristocracy! It’s a subtle message conveying you appreciate quiet elegance.