On a side street in downtown Wroclaw is a restaurant that would find itself at home with the younger chef-driven restaurants in Scandinavia: Malarska 25. With simple, dark wood fixtures and a warm, cozy atmosphere, this is on-trend without being “trendy”. A concept beloved in Poland — but would be appreciated anywhere — is their approach to the menu: locally-sourced, house-made, modern takes on “grandma food”. You really get a sense of place. I was happy to be hosted to experience it! 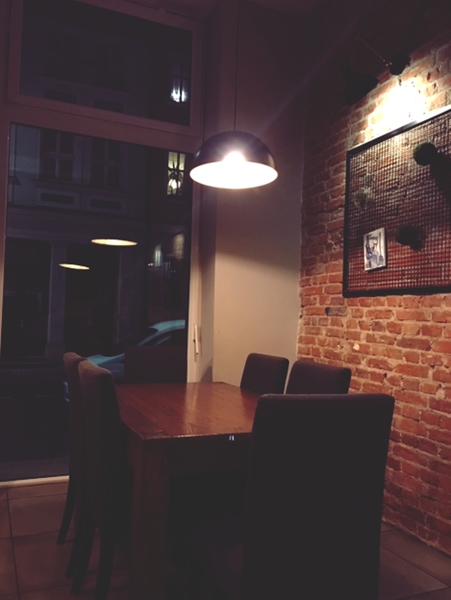 Their wood-fired oven is their pride and joy.

I had heard about a special, seasonal drink beloved by all of Wroclaw, but not easy to track down: hot mulled beer. Whaaa? As it turns out — not surprisingly — they serve it here. I had to try it! It’s served in a glass mug with orange, clove and cinnamon. It’s not too sweet. It’s like cider, but beer! 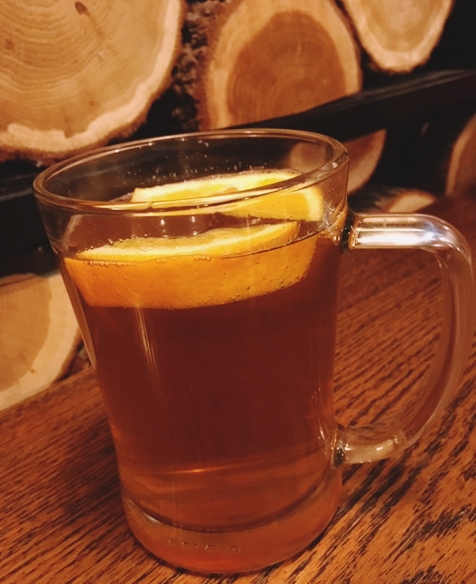 For a starter, I tried their beef tartare. Did you know that eating raw beef (or horsemeat) originated in the Slavic regions? So, a good traditional thing to order. They garnish it with a fried egg, which is different, along with house pickled brunoise of carrots and fementations, buckwheat, herb oil and creme fraiche. It was tangy and flavorful. 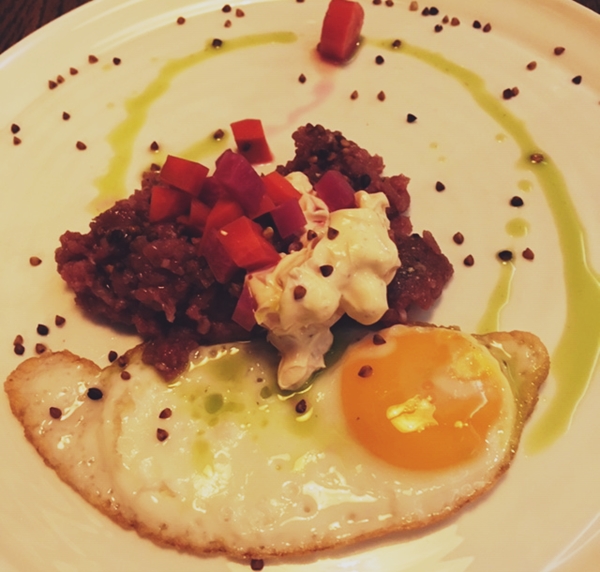 Another interesting  dish — either as a substantial starter or light entree — were duck dumplings (they offer different kinds) with cranberry and creme fraiche. I was intrigued by these! I surmised, correctly, that they used duck offal.  Sophisticated dumplings that would be welcome in any world-class city.

Chef Dawid Skura won the 2017 Pearl Award for “Best Regional Dish in Poland” for his catfish. I just don’t care for catfish, so I entrusted his skills to another entree: Wild boar ham! This modern-style presentation (almost deconstructed) had roasted potatoes, crisp Brussels sprouts, caramelized plum — plums are super popular in Poland — remoulade and house pickled veggies for snap. The meat was very juicy, tender and peppery! I had it medium rare, nicely browned on the outside.

Another dish I got to taste was the venison goulash: another taste of place. It was served with root veggies, herbs, and what they call “mashed potato dumplings with parsley”. I would definitely describe them as elongated — like little cigars — parsley gnocchi. The goulash was rich with game meat and a good hit of paprika.

A home-style dessert also got modernized, with a deconstructed presentation and updated flavor combo: apples, pear, plum and pumpkin (!) served more firm than stewed, with sprinkled crunch and honey sauce.