approaching the entrance of Bardot, one tends to forget one is in a Las Vegas casino. The portico is charming and portends great architecture and interior design. It was created to resemble a 1940’s French brasserie: a time when the country was rebuilding and rediscovering its joie de vivre. There are touches of pink — including pink roses when it isn’t the holiday season — for the romantic touch. It is the brainchild of I was glad to be hosted to experience it!

Dress attire is dressy casual. Mina purposely turns the music up a bit to rev up the energy of the room.

Accordingly, their  popular Saturday and Sunday brunch offers everlasting rose’. The restaurant appears to be going into more of a lunch format in early January. They also offer a number of rare wines by the glass, thanks to the new Coravin needle. Bardot is also the only place where you can order Dom Perignon by the glass. On this occasion, though, I ordered one of their freshly squeezed (tomato) Bloody Marys, garnished with cornichon, olive, lemon zest, asparagus and a pretty cocktail zebra cocktail tomato. I would describe the drink as savory and peppery, but not hot/spicy. 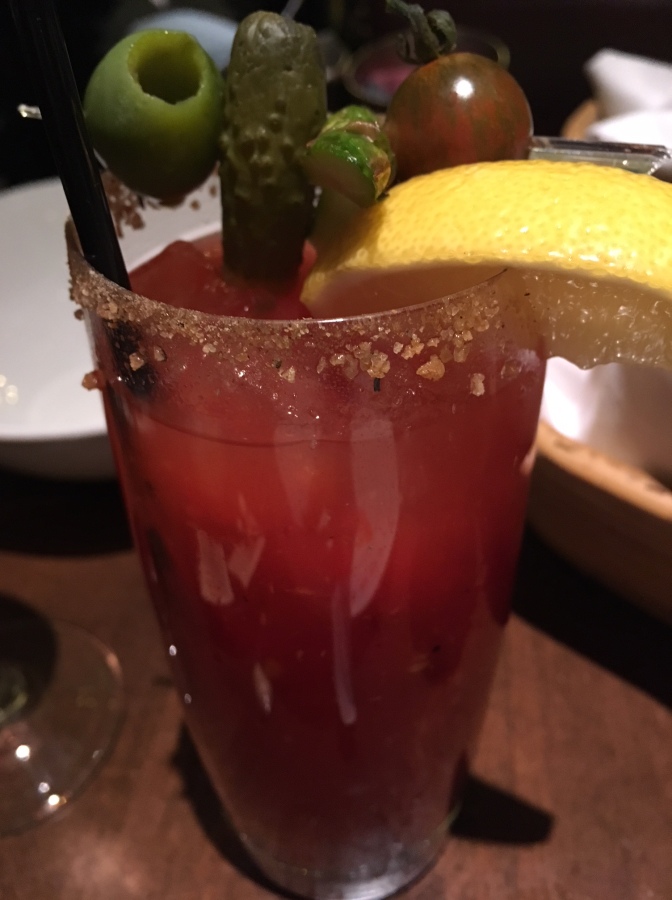 Speaking of drinks, I recommend that you order bottled water with your meal. I do not prefer the local Las Vegas tap water.

A basket of pastries showed good balance in flavors, providing some sweetness, some salt, some buttery notes, but with each being a different authentic creation. They were tender and light, not greasy. You will lose the battle against carbs!

The tiniest details are attended, to give that authentic French experience. Bread service comes with Echire butter and sel de fleur gris from France. Echire is a special AOC — name controlled to location of production, same as Champagne, but in the case, Deux-Sevres — artisan produced for over 100 years. It is said to have between 80-84% minimum butterfat. It’s very creamy, not lactic acidy, like I thought it would taste. The French salt is very salty! 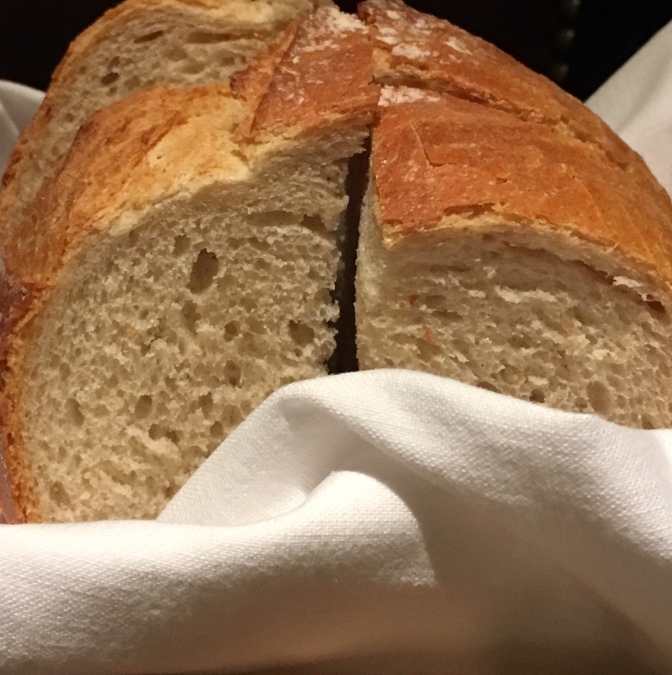 A fresh way to dine is with the petite seafood tower. It had oysters from Washington State, strong and meaty, like the French ones I’ve sampled in Europe. They are small, with deep cups. I like them with a little Tabasco, to balance the meatiness. They’re presented with mignonette and lemon, as well. The other seafood in the tower were prawns, crab leg and lobster with remoulade. The seafood was seasoned with salt and pepper, so as not to be just blah proteins.

Their onion soup gratinee’ is beef broth based, with baguette crostini and cave-aged Gruyere. But you have the option of add-ons to take it into splendor with black truffles, beef short ribs and poached egg! The truffles create the most intense aroma. Short ribs gives the brew a sweeter flavor than traditional French onion soup.

Can there be too much truffle indulgence? Nope! Their black truffle French fries are cured in salt water and apple cider vinegar, then fried in beef fat. They’re crunchy and packed with flavor!