Back in the Midwest, I grew up with a kid who became a famous movie director. I don’t really like his kind of movies and we don’t have a shared weltanschauung. I’m not particularly envious about his hobnobbing with movie stars, either. But he did accomplish something many years ago that stuck with me hard: he won an award where he got to eat at Alain Ducasse’s Le Louis XV in Monte Carlo with Prince Rainer. This was the artistry that fascinated me! Reading about multiple Michelin award-winning Ducasse’s elevated treatment of the produce and seafood of the Mediterranean, eating his cuisine became a decades long dream. I was very happy to be hosted to experience his Las Vegas creativity at Rivea!

We — the world — almost never had the chance to eat his creations. In 1984, Ducasse was the only survivor of a plane crash in the Alps. He almost lost his leg. The night before I went to Rivea, I slipped on marble flooring and had a severe sprain . . . I came to dinner in a wheel chair. When the Maitre d’ told me this story, it lifted me out of my dark mood and was inspirational.

Rivea — in the Delano Hotel —  is meant to evoke the laid-back, vacation vibe of the Mediterranean coast. French jazz plays in the background. I would describe dress as cocktail wear. You can see the whole city from the floor-to-ceiling windows. Lighting is subdued, but not furtive. There are a lot of curved lines with tables, walls. Tableware is casual.

I’m glad that they serve a number of signature cocktails from Ducasse’s adjoining bar, Skyfall. I tried Victim of Elegance, made with (house) Champagne Alain Ducasse, Aperol, strawberry, dry vermouth and lemon. I can attest to how authentic this drink is at Mediterranean beach bars: it’s a riff on the famous “Spritz” cocktail. It’s terrific and refreshing! The strawberry flavor stands out with the bubbles. 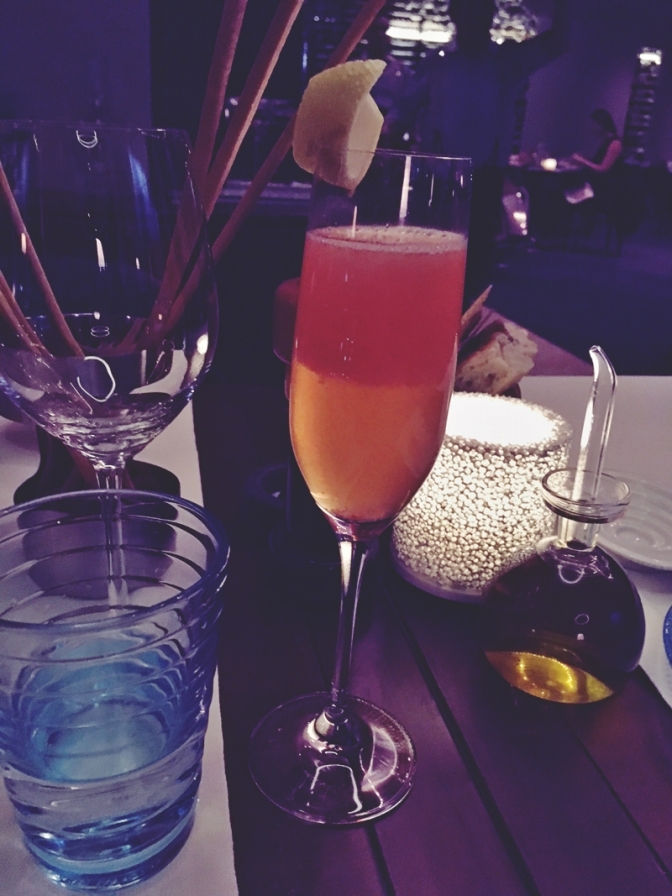 I tried the tasting menu. I especially enjoy tasting menus, because they tend to mix customer favorites with the chef’s specialties, to get you to expand your culinary horizons.

A special starter that night was foie gras, served with roasted pear and apple chutney. It was presented on a dab of duck fat aioli, perfectly seared. The fruits provided subtle, natural sweetness, while still respecting the protein.

Raw Chilean sea bass was marinated with grapefruit, lemon and orange. The sharpness acted as the classic appetizer, stoking up the appetite. The fish was firm and succulent.

Caponata traditionally differs from ratatouille by incorporating tangy and brighter flavors. At Rivea, the ingredients stand out further by being cooked separately: both the flavors and colors retain their uniqueness. Their caponata incorporates pignoli, bell pepper, spices and tomato. Rivea sources prized produce right across the border in California. A good go-with is panisse: chickpea flour fries. They’re heartier than potato fries, seared on the outside and tender on the inside. 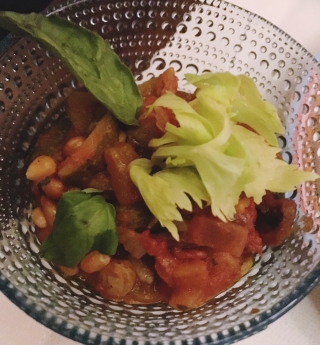 With this course, I drank a white Burgundy wine, whose body and richness went with the spices.

A rich, excellent risotto was studded with chanterelle mushrooms and flavored with veal stock reduction and onion chives.

A little snacky bite was tigelle with cured tender ham. So, what’s a tigelle? It’s a unique pressed bread, cut into a circle shape. They’re kind of like pancakes with slices of ham!

Their John Dory dish is a delicate version of bouillabaisse. John Dory, also called St. Peter’s fish, is a European fish with white, meaty, firm flesh, quite mild and sweet. It was served with a beautiful prawn, calamari rings, clam in shell, all ensconced in a light rockfish and lobster broth. It’s garnished with a slice of toasted baguette dabbed with a saffron aioli. The dish sits upon half a baked purple fingerling potato. It’s served with — and you need all three! — a fork, knife and deep spoon. It’s lightly salted, just like the sea!

Dramatic classically French dish Tournedos Rossini may have been created for the famous opera composer. Its luxurious ingredients also have that Las Vegas – all of us can be royalty feel. It’s an Angus filet mignon topped with foie gras, with lots of shaved black truffles blanketing it. This rich, meaty decadence is best enjoyed with a fine Bordeaux wine. 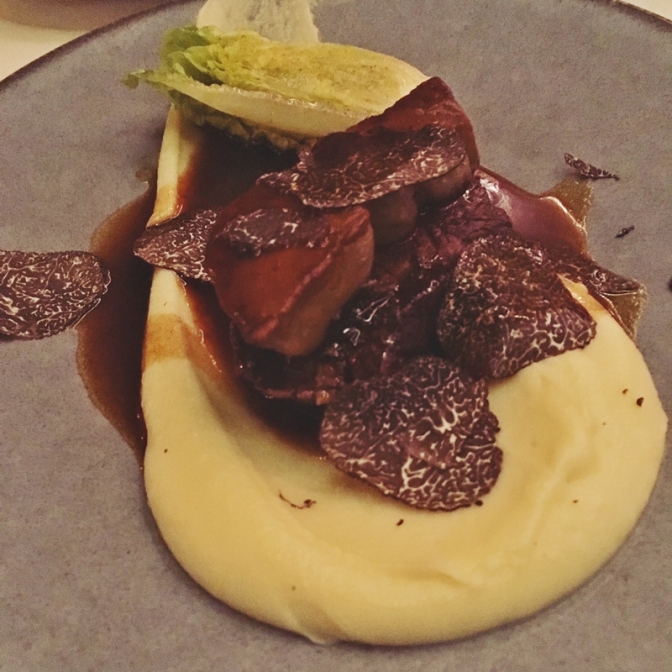 I tried two desserts that went in different directions. What are you in the mood for? Limoncello baba was a citrus-flavored brioche laced with vanilla syrup, chilled Limoncello and Chantilly cream. The tartness of lemon and the alcohol refreshes the palate and is a lighter way to end your meal.

I was glad to be able to try their traditional zuccotto, as it normally serves 4-6 people! It’s an amaretto-vanilla sponge cake, hazelnut mousse, French chocolate and caramelized hazelnuts. This is embellished with a bit of 24kt gold! Triumphant! Let them eat zuccotto . . .

For smokers or even to catch a bit of fresh air between courses, there’s a deck with sweeping, panoramic views of the city. 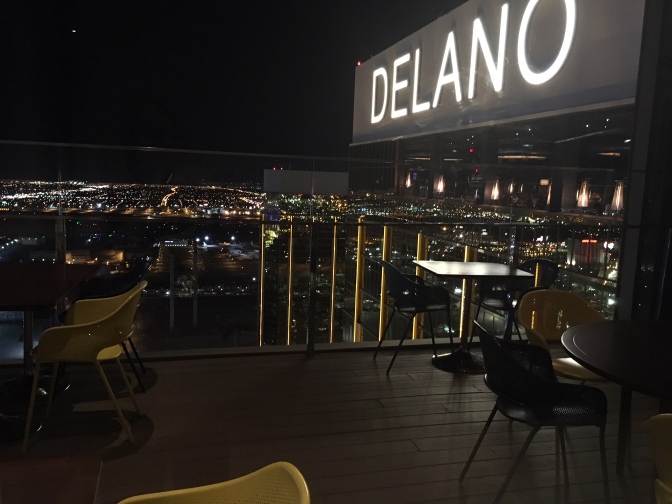