Harris Crab House & Seafood is the restaurant outgrowth of the Harris Seafood Processing House, which has a family history going back to 1947. Of course, for 400 years, Europeans first started harvesting the bounty of the Chesapeake Bay and it became a form of currency.

As you cross the Bay Bridge from the Annapolis area on US 50, you quickly come up the little spidery inlets known as the “Kent Narrows”. That’s where you find the restaurant, right on the water. It was hot and humid out, so I ate inside, but I noticed that they have a new dockside coffee and dessert bar. My dad used to teach me that you could go anywhere in the world for (just) “coffee and . . . “.

I ordered a half dozen local Chesapeake Bay oysters. I did read a couple of weeks ago, though, that because of the record rainfall in the area — cutting the salinity — the oysters were affected. I’d agree; they seem a little blah this season.

Maryland seafood restaurants are generally a casual affair. Here, they supply rolls of paper towels, newsprint table covers. Their house brand of seasoning has a bit of cayenne heat, a bit of sweetness, a bit of salt. It enhances, rather than covers, the flavor of foods.

I was in the mood for something light, so I went with a “seasonal highlight” special: avocado citrus crab salad. It is spring mix, oranges, pineapple and blueberries tossed in an orange vinaigrette topped with lemon aioli crab salad with sliced avocado. You may think you’ve had seafood salads with fruit before, but I guarantee, not like this! That orange vinaigrette really ties everything together and adds interest to the greens. The crab was fresh and sweet. 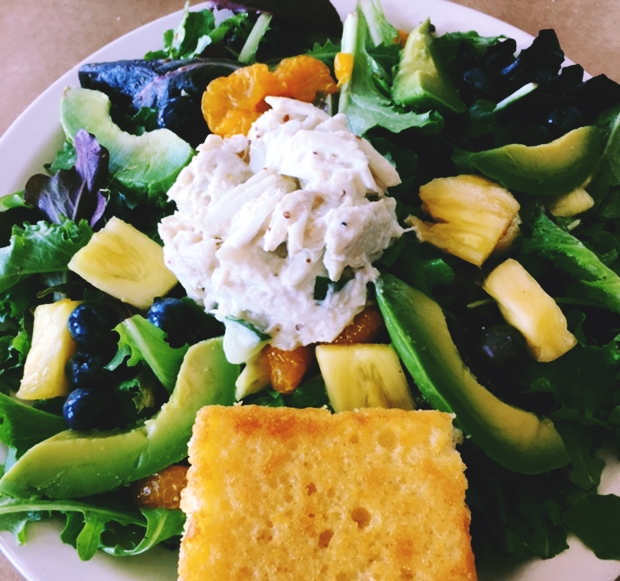 This is corn season in Maryland and Maryland has been known for hundreds of years for choice varieties of sweet, whiter corn. So, of course I had to order it as my side! They do have a fair number of sides to choose from. I sprinkled it with their seasoning and it was a good match.

You can get a fried soft shell crab as an “a la carte” for $7, which is a pretty good deal. It adds to your meal or lets you try one before committing to a whole sandwich/meal. I do prefer mine to be crispier/crunchier, though. They garnish it with local cantaloupe and Maryland is well-known for their ‘loupes.

For dessert, they offer the Maryland state dessert: Smith Island cake! Smith Island is a remote barrier island that has been settled for 400 years and they retain a more Elizabethan accent. About 200 years ago, wives of the island sent their watermen husbands off with these finely layered cakes as a treat during oystering season. A few years ago, a financier started a cake company to ship the cakes all over! The unfathomable requests made it necessary to move operations to mainland based Crisfield, MD, but the company pays the ferry boat to commute islanders to work there. This year, they branched out from the classic yellow cake/long lasting fudge combo to a few other flavors. So, I had to try the Red Velvet. It’s very moist, with more of a sweet icing frosting than cream cheese icing, if you can imagine that.

I first starting going to Harris’ many years ago, with my late friend and attorney, Stuart Snyder. He’s the one who introduced me to their house dessert, their own Nutty Buddies! It’s a marvelous improvement above the ice cream truck favorite, with nice chocolate coating and freshly roasted peanuts. They offer a “mini” — a regular ice cream cone — which I got, along with one of those gigantic cones.