On the Delaware River, right near where George Washington made his battle changing crossing, there are two little towns with very different vibes: New Hope, PA and Lambertville, NJ. Lambertville seems to have a bit more of a calm, elegant scene these days — just the way I like it! The town predates the United States and indeed, there’s a church cemetery with 300 years of history, including Lambert family members who fought in the Revolutionary War.

Right by the bridge to the Keystone State is a restored 19th century train station that’s now a beloved waterside restaurant: Lambertville Station. I first started going there several years ago and I’m glad to see that my favorite dishes and things about the place are still going gangbusters. 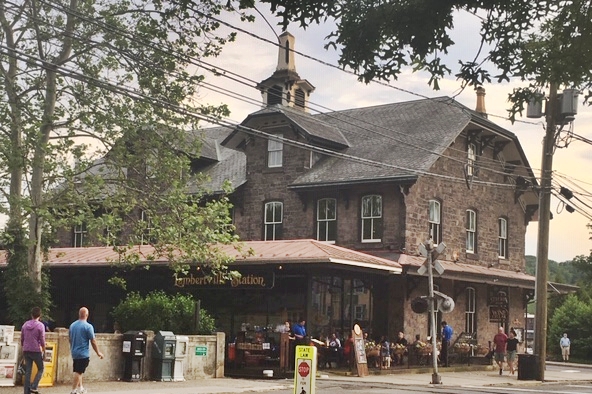 Did you know that during good weather, their outdoor patio is dog friendly? I actually brought a dog there years ago, Mr. Jefferson. This time, I headed up there by way of what my dad used to call, “the scenic route”. That’s a euphemism for, “I don’t like paying tolls!” Having taken a few hours to get there, I’m glad I didn’t take Madam CJ.

I started with their Bridge Street Social cocktail: pomegranate and orange liqueurs with Prosecco. I found it a little “boozy” for summer drinking in a large wine glass — I didn’t drink much of it. I think they could re-work it to be more thirst quenching.

At their hostess stand, they offer recipe cards. I noticed one that I had from years ago wasn’t on display. As we sat down, I looked around a little anxiously. I asked the server, “Do you still serve your coconut bread?” She replied that they only do by request. After a moment of disbelief, I said, “Okay! Consider this my request!” This bread is like rich, coconut pound cake. I’m sure it would be divine as French toast with a rum sauce. They presented it this time with herb butter, which I’m not sure “works” the way a honey or cinnamon butter would. 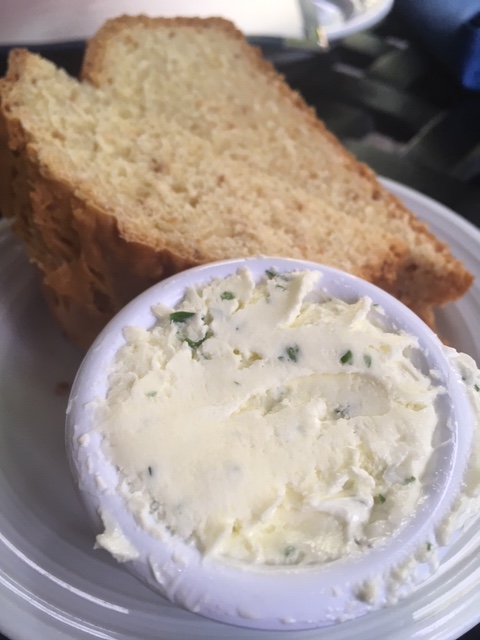 On a warm summer’s night, you want something light but satisfying. Fresh and simple is better. I’ve always loved their Lobster and Crab Salad: lobster claw, jumbo lump crab, baby watercress, chopped plum tomatoes and scallion on a bed of Boston bibb lettuce with their orange peppercorn vinaigrette. It’s a richer dressing (egg yolks, perhaps?) and it totally complements the lovely, fresh seafood. Recently, I’ve seen a lot of country folks online, mentioning that they serve green onions as a side. With the scallions I get at the grocery store, I couldn’t imagine snacking on the pungent allium. But on this salad were were the youngest, freshest, sweetest scallions I’ve ever had!