A brief history of Wroclaw, Poland:  you may as well pronounce it “Vratslav”, because it is and because Vratislav founded the town in the 10th century. Vratislav begat Wenceslas (of the Good King Wenceslas Christmas hymn), who was murdered by his brother, not-so-good Boleslav the Cruel. Boleslav the Cruel begat some generations of people and I used to be married to one of them. It was a Bohemian (what we now call Czech) stronghold.

The lands became Poland and then part of the Austrian-Hungarian Empire, then Prussia and eventually, sadly, Nazi Germany. At the Potsdam Conference in 1945, the Allied countries shifted Poland’s borders completely west. Thus, Wroclaw is Polish once again. Last month, Poland just celebrated its 100th anniversary of independence! So, as you can well imagine, a restaurant that is in the historic medieval town square, adjacent to City Hall, is going to specialize in traditional Polish cuisine! 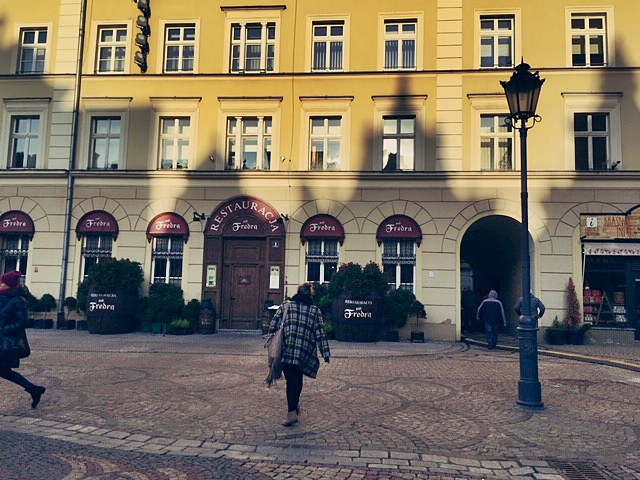 Pod Fredra is clearly an upscale place — many well-heeled tourists do love to stop in — but beloved by locals and not pretentious at all. I was happy to be hosted to experience it!

You know a place is down to earth, if there are hanging sausages as you walk in.

There are lots of antiques and musical instruments of the Slavic region: violins, balalaikas, lutes. My dad would’ve loved this place, but he definitely would have wanted some live music or at least traditional music recordings. The place reminded me of a gig I had as a kid on Sunday nights, playing gypsy violin music at a Serbian night club in Chicago. 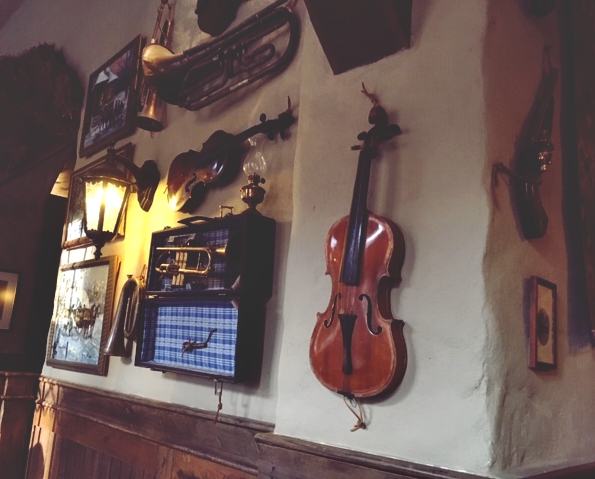 As you can clearly see, the place has loads of charm! I selected some super-traditional favorites from the menu.

I had never had sour rye soup — “Zurek”, served with egg and white sausage — though I have a box of the stuff made in Poland that I bought at Euro Deli. It has the lively sourness of schav, not too rich or heavy an opening course. With the egg and white sausage, if you like Vietnamese pho, I’m sure you’d love this.

I couldn’t go to Poland and not eat pierogies, right? I used to order two orders of the things delivered from a place in Towson when I was at Goucher . . . but these were much better and more elegant. Because they are fried and not boiled, you don’t dunk them in butter. I don’t know why this restaurant calls them “Ravioli Ruskie,” because they are Polish and not the Russian piroshke, which are similar but not the same. I think they were stuffed with ground pork.

These were served with a number of pickled veggie salads. Polish cuisine definitely leans on pickled foods. I’m content to eat a little as a condiment sort of thing, but “they” do say that pickled items are good for your health. It was certainly a way to get your veggies in the cold winter, which is when I was there.

For dessert, I tried Polish marshmallows with raspberries! The marshmallows were vanilla and creamy, with a raspberry preserve. The creaminess reminded me a little of flan. With the portions and presentation, it was a satisfying and elegant end to the meal. 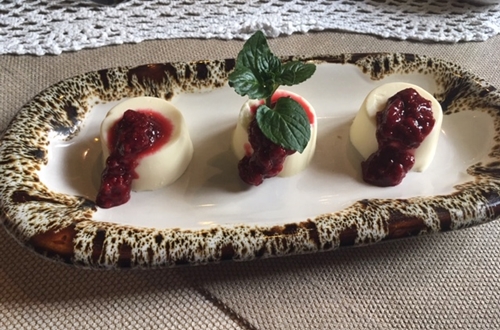 Being jet-lagged, I ordered coffee. I was interested in ordering tap water, but that seems to be a no-go — with very, very few exceptions — across Europe. They want you to buy the bottled mineral water.