I’ve been on some long-haul journeys, but four flights spanning four countries in a day, along with missing two connecting flights, about did me in. I knew I’d be checking into the Novotel Wroclaw Centrum in Poland and that they had a restaurant. Would they even be open? If so, what would the food be like, especially late? Their website doesn’t give a clue. So, like Andy Kaufmann doing Mighty Mouse, I’m here to save the day! Actually, they’re the ones who saved the day. One time, years ago, I appeared on Dr. Phil: the hotel that Paramount Television paid for snottily informed me that even room service shut down 3 minutes before I checked in. I have to say, the folks at Novotel Wroclaw Centrum are energetic and friendly, with a good command of English. Sometimes, that beats fancy-pantsy when you need help.

The Novotel is a medium sized, modern place with clean lines, bright colors. Every night, the Novotel Square Lounge Bar serves food until 11 pm, with the bar open until midnight. Plus, they do room service, but I wanted to be in the thick of things.  It was my first meal in Poland, ever! When I got there, the main dining room was curtained off, so I sat at the bar.  I could also have sat at a little round table or in front of a large sports tv.

They have a selection of beer brewed in town from Browar Stu Mostow, which I had the opportunity to try later in my trip. That evening, however, I needed to relax and rehydrate — badly. They had a lovely selection of interesting teas, so I had them brew me up some chai.

Now, my meal was no doubt pricey for the locals, but thanks to super favorable exchange rates, my whole dinner — along with tip, tea and dessert — worked out to be just $25!

There were lots of tempting things on the menu, but I realized that I was exhausted and probably needed to keep things simple. Though I have been way, way disappointed with steak throughout Europe, something told me to give it another shot. The rib-eye dinner was really a treat! Perfectly cooked to my specifications (medium-rare), it was well marbled, properly seasoned and garnished with micro-greens. Most places in Europe serve Bearnaise with steaks — so many need to, to add a little richness back — but this was icing on the cake here (if that’s not too weird a metaphor to use for the savory course). The sauce was buttery, but not goopy.

Much to my approval, there was actually a substantial side salad, American-style. It had radicchio, butter lettuce and nice cherry tomatoes, dressed with a house-made vinaigrette.

I was getting pretty full by then, but I saw a dessert on the menu I just had to try: tomato cake! It had a ginger glaze icing. It was beautifully garnished with fresh figs, blueberries, strawberries and even an orchid that I didn’t spot until I was half-way finished with the generous portion. The cake itself was tangy and moist, with crispy edges. The icing lent quite a spicy hit. 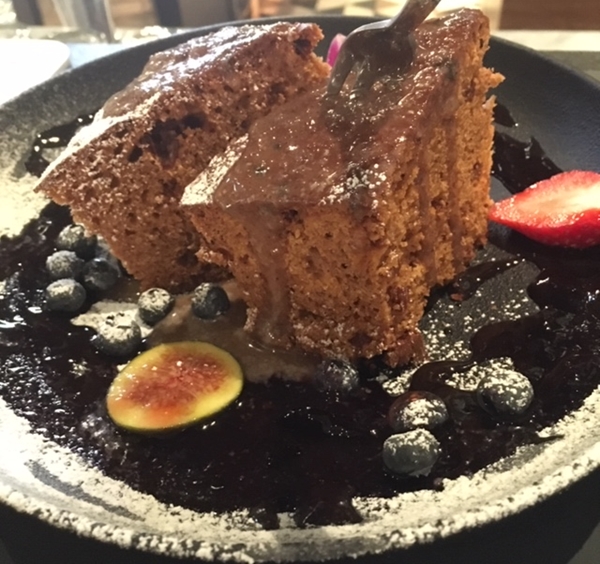