A couple of trips to Reykjavik previously, I was able to piece together my first two words in Icelandic. I was so enamored, I eventually got an Oxford Dictionary of Etymology, to perhaps learn old forms of English and Old Norse — I didn’t want to miss a delicious thing! From my high school French, I realized that “Humar” is probably like “homard”.  I figured out from Germanic cognates that “husid” was house. House of Lobster! And yet, on these previous trips to Iceland, something or someone was always preventing me from fulfilling my destiny. Recently, I was finally able to go to Humarhusid! I was happy to be hosted to experience it. 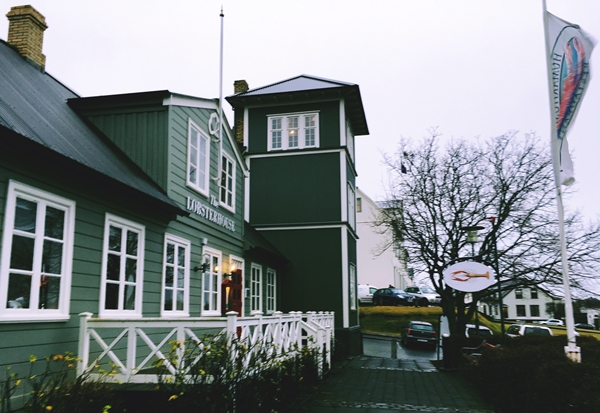 The restaurant is in a house built in 1838 by the then head of state. In the 1970’s, there was a movement to knock down the old, put up the new. In their words, a bunch of “hippies, activists and architects” struggled for a decade to preserve the house. It’s got some quaint touches, but these hippies must have had a solid dose of elegance, too.

The lobsters of which the Icelanders speak are actually langoustines, pulled straight from the icy North Atlantic and the North Sea. They highly recommend a dry Chablis them, so keep that in mind!

Soft guitar music plays in the background of this calming place. Even the smallest touches are considered: the bread course is served with a very rich, lactic butter topped with “Viking salt” — locally harvested sea salt blended with seaweed. 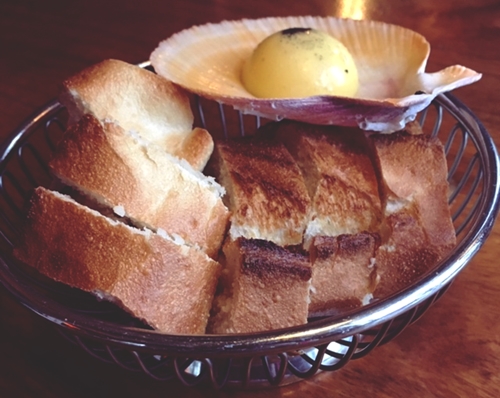 The a la carte menu has — of course — lots of langoustine, but also Icelandic specialties like seabird, horse, minke whale. But the popular thing to do is to order one of their langoustine prix fixe meals, so I did!

The cream of langoustine soup is beautifully presented: a juicy langoustine is plated with savory whipped cream and dill oil, then the rich, hot soup is poured over. It’s meaty with rye bread notes, intensely flavored — not fatty. The soup is malty brown in color, with big hunks of seasoned, marinated langoustine. The dill oil adds grassy notes. 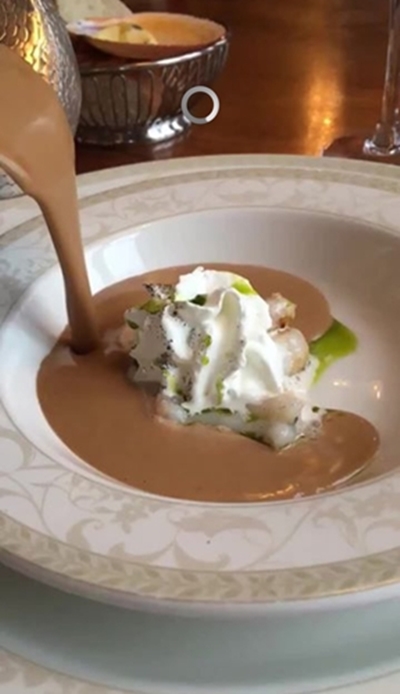 For the main course, several delicate, delectable grilled langoustines are served with garlic cheese bread. The bread itself had interesting wine flavors. You pour melted butter over the whole shebang! The dish is quite special.

For dessert, their cappuchino has a good roasty flavor. Creme brulee’ was paired with rhubarb sorbet on oat crumble and spun sugar garnish. It’s not an overly sweet dish. The creme brulee had a nice caramelized not, without that burnt pitch note that so many of them take on. 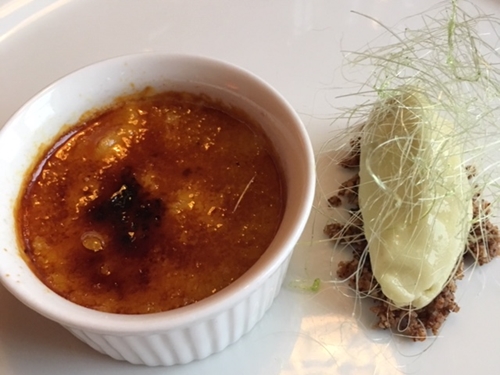 The house has several different rooms, each with its own vibe. So, you can go for a casual, funky surrounding or as elegant as a royal might dine. 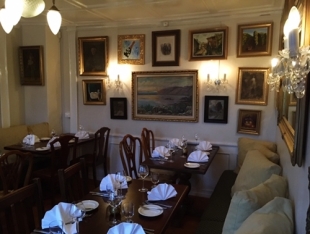 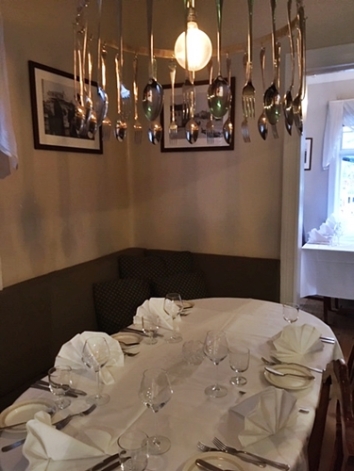