Budapest is a popular docking point for luxury riverboats, and here, it seems, the Danube has a beach of boats. And no wonder. From our luxury Viking riverboat, we could see Buda and Pest, and we faced the Chain Bridge, the earliest bridge to join the two cities. Viking boats were in the majority, so we knew we would be in good company as we explored the city.

Our first sight was on the riverbank promenade, a touching and humble memorial to Jewish people killed by the Hungarian Arrow Cross Militiamen during World War II. The memorial is, simply, shoes. These are replicas of shoes the martyred shed before being shot into the river.  The sculptor Gyula Pauer forged sixty pairs of period-appropriate shoes out of iron. I did not see a single piece of military footwear. Some shoes have heels and laces, some are well-worn shoes of businessmen and laborers. Some shoes are very small. Votive candles around the shoes and flowers placed inside the shoes attest to poignant moments and quiet vigils. I’ve heard the phrase “We shall never forget” many times in Europe, and these shoes attest that Budapest has not forgotten.

Stumbling stones, now all over Europe, can be seen in Budapest. These small, brass memorials are like cobble stones and are built into pavements usually in front of the home or place of business of a Jewish person killed in the Holocaust. They are not a pedestrian hazard as they lie flat with the road. But if you are looking down and see a brass square with a name, date of birth, and date and place of death, your thoughts stumble. You remember and you know you will never forget. Horror has a name now, a spouse, parent, or child sacrificed on the altar of evil. These stones originated in Germany, now coming to terms with its past, by Cologne-based artist Gunter Demmig. The first stones were placed in Budapest in 2007 and remember those with no surviving families. These stones are privately funded and their numbers in Europe, and in Budapest, continue to grow. According to the Talmud, a person is only forgotten when his or her name is forgotten. I write all the names I stumble upon in our family Bible.

The Dohany Street Synagogue — inaugurated in 1859, heavily damaged in World War II with 27 bombs, and completely reconstructed by 1996 – is an oft-visited architectural wonder and beautifully designed sacred space. The original garden was not built for its present purpose: a memorial park. It is named for Raul Wallenberg, a Swedish diplomat who saved 35,000 Hungarian Jews, and its center feature is a weeping willow tree made of stainless steel and silver. On its 4,000 leaves are names of those who perished and whose surviving relatives and friends wish to remember them through this memorial. Behind the tree, four red granite columns surround a black column lying in the middle. This group of columns honors Righteous Gentiles like Raul Wallenberg who risked their lives to save Jews from deportation and death.

From somber to spectacular

The beauty of today’s Budapest is highlighted by reminders of its haunting past. The city has overcome so much and does not ignore its shadows – nor does it linger in them.  From the Danube, Budapest by night is illuminated by glorious castles and huge historic buildings on both sides of the river that glow and beckon a visitor to explore more of the city. Our Viking Riverboat cruised along this route passing under Budapest’s many lighted bridges. We sat on the sun deck wrapped in provided shawls and listened to a commentary about these celebrated structures.

The next day we sought lesser-known Budapest treasures. While Budapest has authentic castles to explore, Vajdahunyad Castle is its newest. Instead of being built for defense against invading armies in armor, it was built for a temporary exhibit: the 1896 Millennium Exhibition.  It is a fantasy pastiche displaying Hungary’s architectural evolution over the last 1,000 years.  It sits on its own island and is accessible by four bridges. Based on a Transylvanian gothic castle, the building includes a variety of styles including Roman, gothic, renaissance, and baroque.  It was constructed of wood and meant to be temporary. Its popularity was not fleeting, so it was rebuilt of stone and brick in 1908. It remains a unique Budapest highlight conveniently located in the city park.

The statue of Anonymous by Miklos Ligeti in the inner courtyard was commissioned in 1903. The sculptor was tasked with portraying a typical Hungarian face. Instead, Ligeti sculpted a mysterious, hooded, faceless figure to represent an unknown, medieval royal chronicler. Although it is not what the sculpture committee ordered, it is one of the most photographed sculptures in Budapest. Legend suggests that if you touch his pen, you will become a famous writer. (If this is true, I am still waiting. But since touching his pen, my friend’s emails contain more words and fewer emojis.)

Crossing the river, we did not miss the must-see Matthias church restored to its original 13th Century plan that incorporates original Gothic elements. Its diamond pattern roof tiles and gargoyle-covered spire make this church stand out.  It houses the Ecclesiastical Art Museum that begins in the medieval crypt and leads up to the St. Stephen Chapel. Many sacred relics and medieval stone carvings can be seen along with replicas of the Hungarian royal crown and coronation jewels. The last two Hungarian Habsburg kings were crowned here. During the Turkish Occupation from 1541 to 1699 the church was transformed into a mosque. Some Moorish elements remain.

As every outing should include a refreshment stop, we were delighted to happen upon Café Ruszwurm dating back to 1827. In medieval times, it was a gingerbread shop. The cafe is owned and operated by the Szamos family, the only still-active confectionary dynasty in Hungary. The cozy two-room café has a century-old Biedermeier interior as well as outdoor seating. Traditional tools of the old confectionery trade line the walls. The pastries are simply outstanding.  We ordered their Ruszwurm cream pastry, famous throughout Europe, and Hungary’s best known cake: Dobos Torta.  This Hungarian sponge cake is layered with chocolate buttercream and topped with caramel. Unable to decide which was more divine, we ordered two more to go. The menu goes beyond these two culinary delights and includes other traditional Hungarian pastries.

Budapest was just one stop along the way on our Viking riverboat cruise. Seeing the city while based in our “floating hotel” meant that the irritations of travel were not included in our all-included cruise. There was no wondering what our room would be like as Viking ships are five-star vessels. No unpacking just to pack up again in a day or two. The program director was lavish with advice about what to see and when to see it, and the concierge was helpful in making on-shore dinner and concert suggestions and reservations. Guided tours were included, and maps were provided to people who wished to explore on their own. Meals were consistently good, so there was no need to go off the boat for any meal. However, local restaurants were part of our journey. It was good to have an on-board concierge so the restaurants we visited were just what we wanted instead of one of those humorous travel memories that are not so funny at the time. 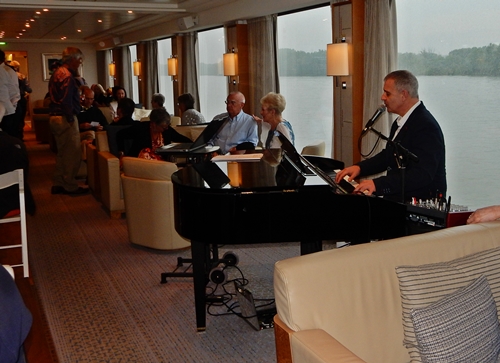 Which reminds me of my first meal in India. I was disoriented, jet lagged, and overwhelmed at having to deal with a different culture. For breakfast I ordered a comforting omelet and resigned myself to tea instead of coffee. The tea was much better than I expected. As for the omelet, would you believe two hard boiled eggs in their shells? That morning, I cried. Now, my tears are from laughter. Even better, my Southern lady auntie who would never, ever eat something as common as a hot dog toured Russia when it was still the Soviet Union. For breakfast, she was served a hot dog in a stale bun. Fearing the Gulag for ingratitude, she asked for a knife and fork and daintily downed the despicable thing. She would have loved Viking River Cruises!