Okay, let’s put this out there right now: your office’s holiday party should be at Miss Shirley’s. I don’t even really care if you’re not in Maryland — it’s easy enough to get here. The restaurant has everything you really want, all rolled in one. Casual dress rules the day and it’s only open for breakfast and lunch. And yet, they have a whole slate of specialty cocktails! They’ve also got some fun, new things for December and the season. I was happy to be hosted to experience it at the Baltimore location.

Seasonal drinks make the holidays, don’t you think? They’re pretty much the first thing you think of when you plan a holiday party. Winter Bourbon Slush has a bit of seltzer to lighten things up in the morning with bourbon, Triple Sec, freshly squeezed orange juice and their house-made raspberry cranberry bourbon jam (making a few appearances on the menu this season). It’s a sweet, yet refreshing cocktail. Chocolate Covered Pretzel Hot Cocoa has all the flavors of your favorite candy bars, but still drinkable. Whipped Cream and Salted Caramel vodkas add to the rich taste. 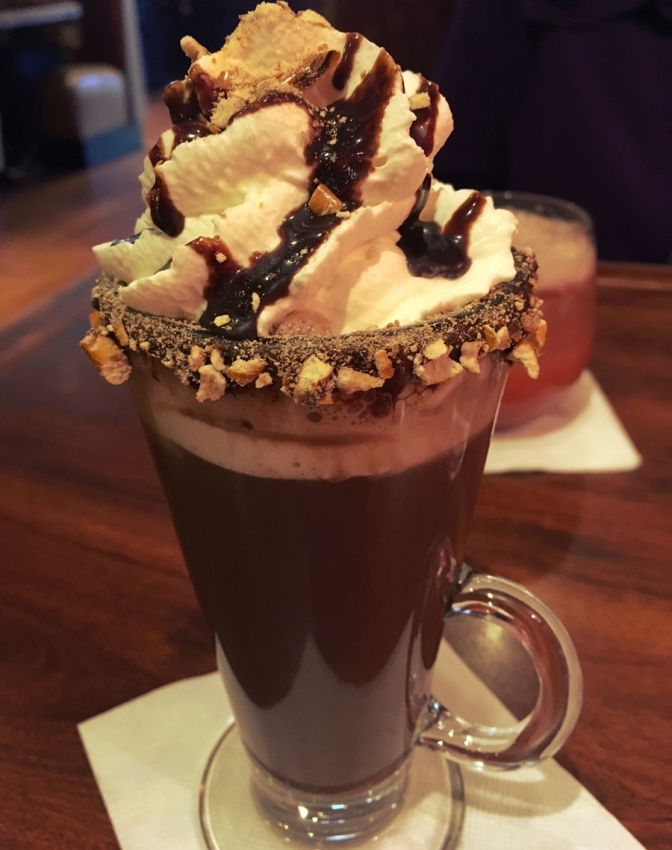 Benne Seed Cheddar, Roasted Corn & Jalapeno Buttermilk Biscuits are served with the raspberry cranberry bourbon jam, but they’re great plain! They’ve kind of have a chowder in a biscuit effect.

Cauliflower instead of carbs is popular these days and a pretty great concept. Buffalo Cauliflower Bites not only satisfy a snack food craving, but they’re one of the many items on the menu incorporating hyper-locally crafted sauces from a number of purveyors.  It’s roasted cauliflower with local Chuck’s Trading Post Buffalo Sauce, served with house-made Creamy Buttermilk Ranch and garnished with sliced celery. Fiber made tasty!

Loaded Southern Fried Deviled Eggs are a Southern take on the Scotch egg, without the sausage. They’re breaded in Panko and fried, filled with cheddar, topped with jalapeño-smoked bacon (true smokiness!) and garnished with local Huckle’s Late Harvest Jalapeño Aioli & Baltimore BBQ Co. Chesapeake Sauce, dusted with Old Bay.  Whew! How’s that for local flavor? This dish is an example of how Miss Shirley’s is a fusion of Chesapeake, Low Country and also, burgeoning and classic Baltimore flavors. This is a place where you order things you might never dare to make at home, but they’re so indulgent!

Oyster Feller is a protein-centric dish with great texture: the cornmeal crust on the oysters is super crunchy! With bacon jam, pimento, chow chow and Old Bay — among other breakfast ingredients like stone ground grits and eggs — definitely has the Miss Shirley’s touch: a kaleidoscope of powerful flavor components that work together.

Miss Shirley’s also has a good selection of “lighter”/healthy items. If you frequent the restaurant, you know that some items are like Cookie Monster says: “sometimes food”. Get Your Veggies Bowl has the “good fat” of avocado, the fiber you need, the different colors that are important in your diet. You can keep the dish vegan or add a number of proteins.