I get a kick reading that globally admired chef and restauranteur Jean-Georges Vongerichten first became enchanted with gourmet dining when he was taken to a Michelin-starred restaurant as a teenage birthday treat. That’s pretty much how my parents ignited that love in me, too! His eponymous steakhouse in Las Vegas’ Aria Hotel — Jean Georges Steakhouse — was my first introduction to his art and I discovered three things: he accesses the finest ingredients in the world, cooks them perfectly, using flavor twists and subtle combinations that show off his sophisticated, worldly palate. I was very happy to be hosted to experience it!

I had looked forward to going for quite some time. How much so? Well, about an hour before my reservation, I slipped on some marble flooring and badly-badly-badly sprained my ankle and cut my foot. Though in agony, I quickly figured out that I hadn’t (well, probably hadn’t) broken any bones. I called some powers that be and arrived in style in a wheelchair. I truly wasn’t going miss this for anything! And you know what? I’m glad. I’d call for a wheelchair again — the restaurant is that fine an experience.

Jean-Georges is well known for his fascination with Asian flavors and fusions. I tried one of the Specialty cocktails, the Japanese Old Fashioned (Kyushiki), with Suntory “Toki”, black sugar, ginger syrup and bitters. It was garnished with a bit of orange peel, adding to the complex aroma. It had a very smoky flavor, like a peaty Scotch. There was sweetness for balance, but it wasn’t sweet, per se. It was quite drinkable. The glass was nice, heavy for its size.

The bread service will shove you off the cliff of your low-carb diet, for sure! So, drink lemon water or whatever when you get back home to wherever you come from . . . it’s worth it. The server called it “milky bread”, but I think he meant Monkey Bread, the pull-apart loaf. It was glazed with butter and sea salt. The butter spread served alongside was mixed with a rich, powerfully aromatic olive oil, thyme and rosemary powder. It was flavorful, but still mild and buttery. The bread was tender. What a fabulous presentation!

I looked around, noticing warm but not furtive lighting and lots of curves with the furniture and walls. Lively classic rock played in the background.

Foie gras has been a luxury food for — they think — thousands of years. It was “invented”, as it were, in the Levant. Their Foie Gras Brulee’ was perfectly seared: grill marks, meaty without being jiggly. It was garnished with toasted brioche pieces, fig and port wine reduction. It had a sweetness that was just the right level — not dessert-sweet, as to overwhelm the foie.

To go with it, I ordered the prized Hungarian wine, Tokaji. This one, to be precise, was Royal Tokaji, Aszu 5 Puttonyos, 2009. It’s a sweet wine created by noble rot. Though I usually drink French Sauternes with foie gras, or sometimes Canadian ice wine, I think this was the most interesting and appropriate of pairings! It has bright and musty notes, with golden raisin and honey flavors that lend themselves to meat. It’s not sticky sweet, but rather, has acid notes for great balance. When I learned about sweet wines on the Austrian/Hungarian border (“The Burgenland”), they pointed out that a fine sweet wine must have high acidity to balance flavors on the palate.

Wagyu Carpaccio is another starter I tried. It’s served with a Compte (meaty, creamy French cheese) fritter, lime salt, aioli and lots of shaved truffles. Even with the umami hit, it also had a natural sweetness. Isn’t that funny? It was also garnished with microgreens that had a licorice note; was it anise? The meat was rich, without being fatty. this dish was a fine example of mastery of flavors.

So, what are the non-steak things like in a steakhouse? First class, thanks for wondering! Chilean sea bass is treated in a way that mimics steak! How ’bout that? It is seared and grilled, a thick cut, glazed with miso-yuzu glaze and plated with Maitake mushrooms that add to the meatiness. The fish retains smoky grill flavors. 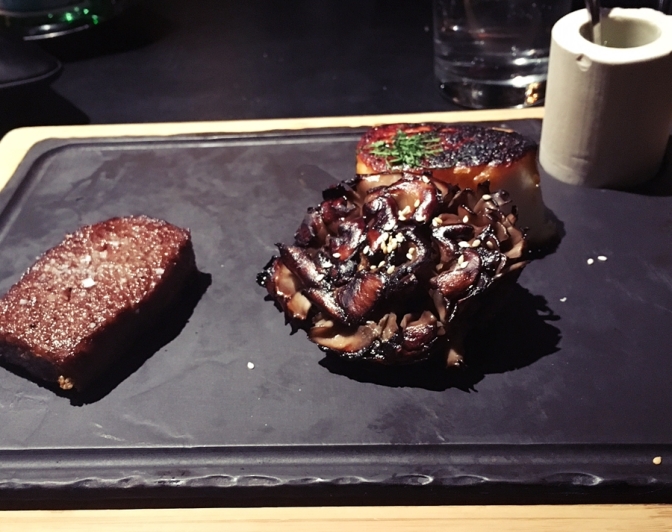 Did you know that Chef Jean-Georges is known for his exquisite sauces? His modern take is lighter and not goopy. I got to try a selection of his classic ones: Salsa verde has herbs, lemon zest, chili peppers, butter and olive oil. Sauce Jean-Georges has tomato paste, honey, tamarind, clove, orange peel and chili. There was also miso butter, habanero butter and a light textured Bearnaise.

Then, there is the beef that Jean-Georges serves, coveted around the world . . . and I got to try it! A5 Certified Kobe beef from Hyogo Prefecture, Kobe City, Japan, is only served at 8 restaurants in the USA! Yes, it’s pricey: $60/oz, with a 3 oz minimum. It’s very rich, without being greasy or fatty. It’s super tender, with meaty – not fatty – flavors. They serve it simply seared, with some sea salt. I tried it with the various gourmet sauces and really liked it with the habanero butter: the spicy, buttery sauce was a great compliment, with the heat cutting the richness.

For side dishes, they had their menu items and a couple of specials. The menu-listed truffle mashed potatoes came highly recommended and rightfully so! They are served with lots and lots of truffles and a big spoon. I’m going to guess that they were some sort of golden potatoes that were roasted before being mashed. They’re super rich.

Their Salted Caramel Sundae has that flavor of ice cream, hot fudge, popcorn with an extra hit of salt and sweetness, along with unsweetened whipped cream. The dessert had brulee’ flavors, not just butter and sugar. It’s great with a cup of coffee!