You probably don’t drink enough water. I know I don’t! The ol’ 8 cups of water a day is out. It’s now 8-13 cups, depending on your age, weight and gender. I’m sensitive to waters’ flavors . . . I’ve even judged the International Water Tasting Competition in Berkeley Springs, West Virginia twice. I think it spoiled me! I don’t like Baltimore’s tap water and bottled water has become pricey. I have a high-powered filtration system, but it leaves a flat taste. Powdered drink mixes are okay, but I can’t take the sweet flavors day in, day out. So, I was especially glad to be hosted to experience the black + blum Eau Good Glass charcoal water filter!

So, I had seen something like this a few years ago, eating at the world-famous Etiki sushi house in the Faroe Islands. That’s actually a super-authentic drink to have with sushi, as this water device uses Japanese binchotan charcoal as a natural water purifier. Here is the Faroese kind. 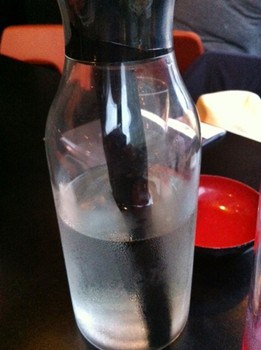 First, you “lock” the charcoal into the hand-blown bottle’s well. I must confess, my stick of charcoal was too long to be locked/angled into the well. Just as I was about to give up, I stuck the charcoal in, as close to the well as I could shake it, then gently poured water in. The weight of the water kept it in place!

Then, you cork the bottle and stick it in the fridge. 2 hours is the minimum, 8 hours is the best for purifying.

It makes my water taste incredibly crisp and delicious! This is a wonderful, natural find. Here’s what they say about the use of Japanese charcoal:

“The origins are not completely clear, but it is believed that a form of Binchotan charcoal (sometimes referred to as ‘white charcoal’) was introduced to Japan by a Japanese monk and scholar called Kukai 1,200 years ago. It was during the Edo Period (17th century) that a man called Binchuya Chozaemon made it popular.”

You can use the stick to purify water for 3 months, then boil it for 10 minutes and leave it to dry in the sun. After that, you can use it for another months. Finally, because it’s green material, you can use it as a natural home deodorizer or chop it into plant fertilizer.