La Grande Place in Brussels is the historic center of action in the city. A sociologist could earn a post-doctoral degree studying the tourists taking pictures of other tourists. They’ve become part of the living tableaux. 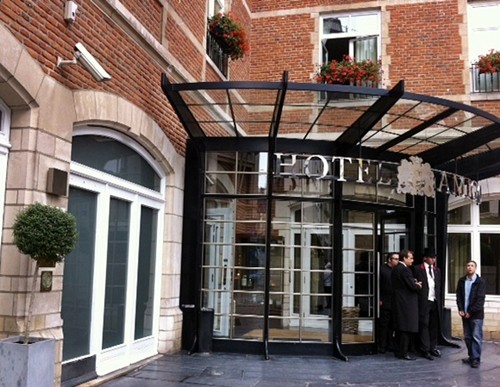 A couple of weeks ago, I had flown into Brussels and wandered around La Grande Place to take some photos, grab some lunch and make a half-assed stab at shaking off jet-lag. I remembered that my mom had stayed at the 5-star Amigo Hotel — she doesn’t mess around with sub-par places — and looked to see what I could eat there.

Bocconi is the Italian restaurant on site . . . Could it be that people staying there don’t want a classic Belgian meal? I went for the “Express Lunch”. At 19 E (about $23 at the time of this writing) before beverages, I was interested in what the experience would be. After all, what’s some moms’ bargain is some daughters’ super-splurge!