It’s not widely — or wasn’t, at any rate — known that I spent a fine month in Air Force Officer Training School. Some people might get scared at the thought of gliding in a motorless sailplane, but not I! You shouldn’t be either.

Over 80 years ago, Harris Hill in Elmira, New York, set itself up to to be the “Soaring Capital of America”. The topography of the area, with hills and plateaus help. The community and WPA helped set up the facilities. Today, there are hangars, training facilities, gliding areas and the National Soaring Museum! I was happy to be hosted to experience it!

The sailplanes can only go up in mostly clear, calm skies during the day. It’s first-come, first served . . .so get there early. Also, you have to weigh less than 225 pounds. You go with a pilot behind you, but since you’re up front, you feel in charge! It’s so smooth, it just doesn’t feel like flying in plane.

Though they’re mostly used for leisure and sporting, gliders/sailplanes have their place in some military endeavors, too. Chesley “Sully” Sullenberger was a glider! His superior skills landing the plane on the Hudson hearkened back to his gliding training.

The museum has some of the early gliders. The Wright Brothers built gliders before they added an engine in 1903. However, the development of gliders really advanced in Germany, because the nation was restricted in constructing planes after WWI. Also, the Wright Brothers didn’t really evolve their design, because they were too busy prosecuting patents for the old designs . . . for years.

The museum also has local art displayed and little unexpected rotating exhibits, like this dollhouse. Dollhouses come in all styles, because they were really a way to teach girls what to expect when they grew up, for their station in life. This house below has a mousetrap and mice! I currently have a terrible mouse problem . . . did my late father buy me a dollhouse with mice? If so, I want a do-over! 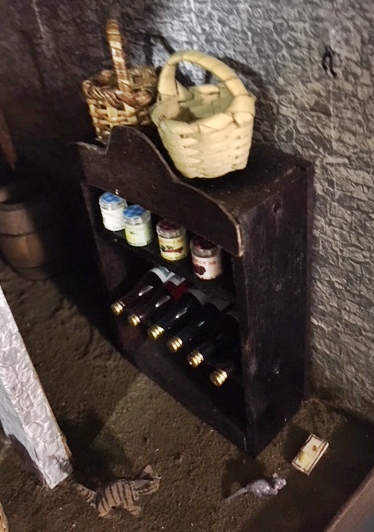